The Flex & UP support very similar sleep tracking, but each device has its own twist on things.

To put the Flex into sleep mode you have to tap the face of the tracker repeatedly until 2 of the 5 lights are lit and it vibrates.  You do the same thing again to get it out of sleep mode.  I haven’t been able to tell exactly how many taps it takes, to get to the center of a Fitbit, I mean change the mode as sometimes it seems to need faster taps or slower taps.

The Up has 1 button and only 1 button.  To change modes you push and hold the button until the “Green Moon” ( or Blue Moon on some bands ) led lights up and the band vibrates.  Changing back is the same, except the “Green Sun” lights up.

Both devices support silent alarms, but they do so slightly differently.

The Up allows you to set multiple repeatable alarms per day, while this in itself isn’t unique, how it wakes you Up.  The Up “Smart Alarm” will wake you up within a, configurable, window when you are in a light sleep, which is supposed to make you feel more awake and feel more rested.

The Up also supports a “Power Nap” feature, which will calculate an “ideal” nap time sometime between 27-45 minutes based on your previous nights sleep.  To start a power nap you press the button twice and then press and hold until the green moon flashes, then quickly try to fall asleep.

The Flex is very similar to the Up, offering multiple repeatable alarms, but the one real place that it lacks is the the “Smart” portion of the alarm.  The Fitbit will vibrate at the exact time that the alarm was set for, no earlier nor later, which while fine, is not quite as nice as the “Smart Alarm” the Up offers.

The Fitbit does not offer a nap tracking feature.

Each device displays the data from your sleep a little differently.

The Up has a very easy to understand display of your sleep data: 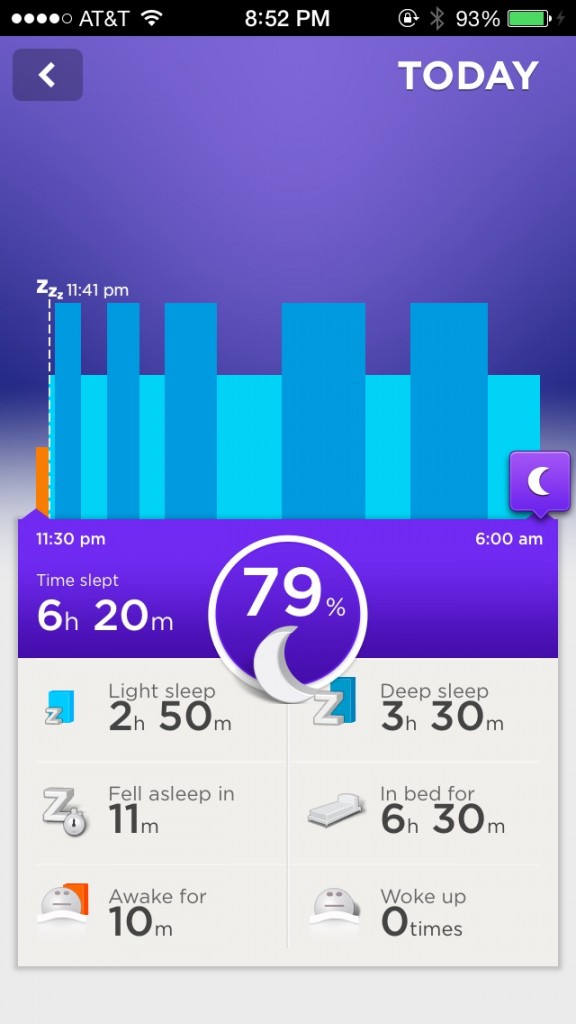 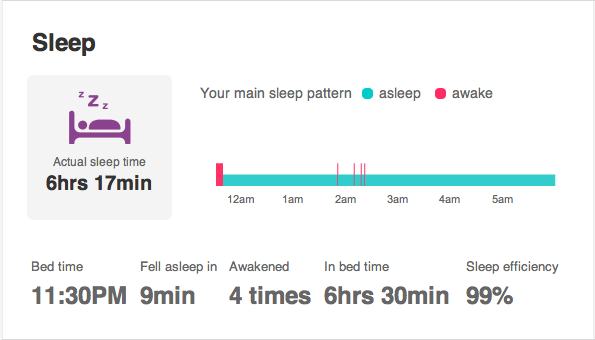 The Jawbone Up has more features, but when it comes down to the actual data logged, I feel like the Flex was more accurate ( I actual recall waking up at least a few times and the Jawbone didn’t recognize any of those.  I wish the Flex was able to distinguish more the light & deep sleep and have a similar “Smart Alarm” feature that the Up has.

My next write up will be activity tracking.